Going Too Far? The Dream Remakes Aaliyah’s ‘One In A Million’

The Dream is living a nightmare after making a remake to Aaliyah’s classic “One In A Million.”

And this really makes you wonder, are people angry that the remake was just lack luster or are they really mad that someone had the audacity to do a remake to one of Aaliyah’s biggest classics?

The Dream wasn’t the only one who considered the thought of doing the remake, there were also whispers that Beyonce would do a remake for “One In A Million.” Apparently after Beyonce received harsh criticism for the idea, she immediately scrapped the entire idea immediately out of respect for Aaliyah.

Should The Dream have taken Beyonce’s route and kept his vocals off of a classic Aaliyah track?

I’ll let you be the judge. Listen to the remake:

Here are some of the reactions to the remake: 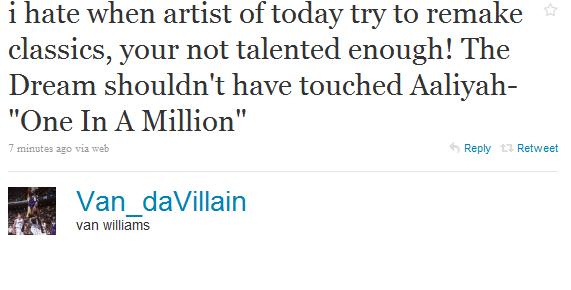 I tried to find mixed reactions on Twitter, but most of them were negative. I am also hearing that the radio stations all over the country are going in hard on The Dream for making the remake. Sucks to be The Dream right now. Hopefully next time, he’ll reconsider making lack luster remakes to hits of late singers with loyal fan bases.