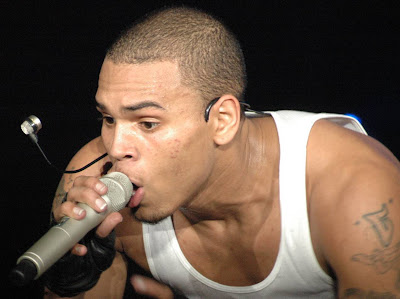 Yes, I am going there LADIES.
By: Amanda Anderson

Surprise, surprise…Chris Brown has joined the allegiance of celebrities gone nude and desperate. Only a few days after tweeting his new blonde do, Brown is caught up in yet another scandal that involves a frontal shot that has blown up the Internet and my social network feeds. Yes, finally, horny women everywhere finally got a peek of a package that most will never even experience first hand. Now while I’m one of the few who cares nothing about some stranger’s genitalia, I must say, I can’t say whether the photos were worth the excitement…but the hypocrisy of women was quite clear.

Now, I am no Rihanna fan, hell, I can’t say I really like any famous person. I do however like certain songs, and love music, but I don’t get attached to strangers I’ll never know. Not my thing.

But one can’t help but wonder how women can be so appalled at Rihanna for her similar bathroom shots, and so supportive of Chris Brown’s. Both were frontal shots taken in some random bathroom, and appeared to be “leaked”  without their permission. While I don’t believe any of these were leaked so to speak, I can say I am more appalled with the reactions of women who did see the photos.

I can’t believe I’m saying this, but the most offensive thing about any of this was the reaction from women.

Really ladies? That’s all it takes to make you drop your panties, a “big” penis?

Let’s think about this. A big penis is usually a feature a man is BORN WITH. Usually, a man doesn’t have to put in any work into having a well endowed…penis. So, in essence, either you have it or you don’t, but no one really works for it.

So you would drop your panties over a feature that required no work? But hey, isn’t that what we do with guys who aren’t famous?

Why be so easy?

This whole entire situation only verifies my thoughts on society’s view on sexual relations. Women complain about men’s failure to control their sexual urges, but women aren’t that much better, AT ALL. Yes, as a woman, I can confidently say that most women are just as trifling as the men they complain about. Men are supposedly the biggest hoes on the planet, but some of us are willing to drop our panties because some random man we don’t even know has a big penis.

These women were talking about all the sexual things they wanted to do to a COMPLETE STRANGER.

Clearly I can’t tell grown folks what to do, but it amazes me how ANYBODY can be so careless about their body. In 2011, Aids is rampant, STD’s are far too common, and research shows various forms of cancer and diseases are a direct result of our addiction to a promiscuous lifestyle.

For the life of me, I can’t understand how anyone, male or female, is that careless over something so deadly.

What’s crazy is Chris Brown has shown on numerous occasions that he isn’t really relationship material. Dude has issues, sure nobody is perfect, but I can’t say he’s worthy of the panty dropping. His resume reads: former pop star, who beat the crap out of his pop singer girlfriend, abandoned her on the side of the road, and throws twitter tantrums and tweets pics of his latest hair do’s…THAT’S sexy?

Cherry on top, the classic frontal nude shot. Wow, isn’t he a catch?

I realize some crazed Chris Brown fan might be offended, but seriously, when are we going to stop putting these type of folks on their undeserved pedestals? Can we not just enjoy their talent without lusting after imperfect people like they are somehow perfect?

Most importantly, why are women so quick to label men as whores for doing the same things that we do on a regular basis? It’s getting harder and harder to show me any real differences between men and women, besides our difference in private parts. Men and women are careless sexually, ignorant to healthy relationships, and caught up in meaningless things undeserving of the rewards we so willingly give.

Lastly, why is anybody okay with being so careless sexually? Do we not care about ourselves enough to recognize the dangers?

Maybe I’m just in the minority, old fashioned, bougie, and naive; but I can say it’s going to take more than a “big penis,” fame, or any other meaningless trait for me to give away a part of myself that is so sacred. And I’m cool with that.

Just another woman who’s aware of her own value…so why don’t you join me?