Twitter continues to make celebrities look ridiculous, and a publicist’s job that much harder.

Samuel L. Jackson has to be one of the hardest working black actors in the business. Jackson continues to get roles in undeniable blockbuster films, and it’s clear that his fan base is partly responsible for the success he’s had for many years doing movies. He should be celebrating the most recent success of Marvel’s much anticipated Avengers film, which easily topped the box office opening weekend; but unfortunately, he was busy kicking Twitter ass for the one negative review he received amass the hundred of glowing reviews the film has already garnered from critics. 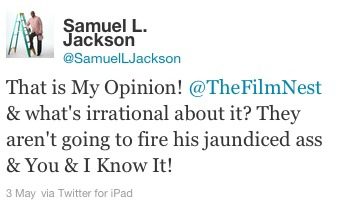 As much as I appreciate Jackson as an actor, the response shouldn’t have happened. Yes, celebrities have a right to voice opinions, but film critics these days are pretty much useless. They don’t keep people from seeing movies. Besides, AO Scott most likely saw the negative review as a way to get a little publicity. Writers have no problem penning bad reviews to gain traction amongst a whole internet of positive reviews.

If that wasn’t bad enough, Sam also took a moment go in on a fan who felt the Avengers star had purposely dissed him at the Avengers premiere:

I vote that all celebrities get off Twitter immediately.