Lil Scrappy Calls Erica Dixon a Fame Wh*re, Says He Can’t Be With Her

Lil Scrappy dating Shay Johnson again? Lil Scrappy and Momma Dee, without a doubt, have a very close relationship with each other. Yet the close bond that they have has caused problems in Scrappy’s love life as she wants to see Lil Scrappy dating Shay Johnson again. Momma Dee’s desire to be locked into what is going on in her son’s personal life has ruined her relationship with Erica. And because of her constant interference in Erica and Scrappy’s relationship, Erica exploded in the midst of their conversation at the dinner table, Erica later letting Scrappy know that she didn’t feel like he had her back that night like she felt he should have. Though Scrappy finally put his mother in her place, after Erica peeped a text message exchange between Scrappy and another female that was a little too friendly in the upcoming episode of the show, she calls off their wedding. Despite Lil’ Scrappy and Momma Dee’s many talks about the way she treats Erica and her heavy involvement in his love life, Momma Dee’s feelings about both Shay and Erica haven’t changed much. And Scrappy still makes it a point to check people who have anything nasty to say about how his mother acts.

When one of his followers tweeted him about Momma Dee’s “bullsh*t” and how no one should have to take disrespect from her, Scrappy defends his mother and says no matter how people feel about her, she is still on TV getting paid. And he makes it clear that he is a single man, despite the talk of him reuniting with Shay Johnson and calls Erica out again (Read from bottom to top): 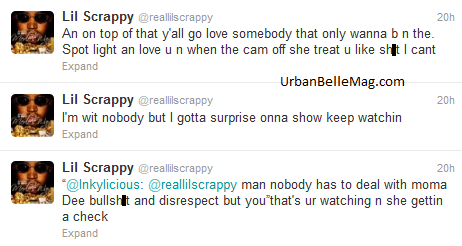