The Deion and Pilar Sanders divorce has been finalized. Deion and Pilar Sanders have had one of the nastiest divorces in Hollywood. The former NFL superstar and his now former wife have gone through a lengthy custody battle over their children. The battle resulted in Deion Sanders getting awarded primary custody of all the three kids. Despite the ruling, Pilar wasn’t going to give up without a fight as she was said to have plans to appeal the decision and the prenup Deion put together before they officially became husband and wife. Both Deion and Pilar have blamed each other for their marriage turning sour. And although Pilar has reportedly moved on to dating Birdman of Cash Money Records, she isn’t done airing out all the details of her failed marriage to Deion as she has plans to write a tell-all book about how abusive he allegedly was towards her while they were married. And after months of drama, Deion and Pilar Sanders’ divorce is now official, RumorFix reports:

The big holdup was the prenup, which Pilar’s team was trying to prove was invalid, but eventually the judge sided with Deion.

After a two-year long battle, the football announcer got custody of all the children and Pilar had to pay her own legal fees.

But as part of her agreement, she will get a $100,000 signing bonus plus $1 million that was guaranteed in her prenup.

Deion Sanders took to his Twitter account and expressed his relief over his divorce finally being over. And in his tweets, Deion gives some advice to all the men out there and tells them not to choose a woman based on the flesh but with their heart instead. Deion’s current girlfriend Tracey Edmonds also tossed in a comment of her own about Deion’s finalized divorce (Read from bottom to top): 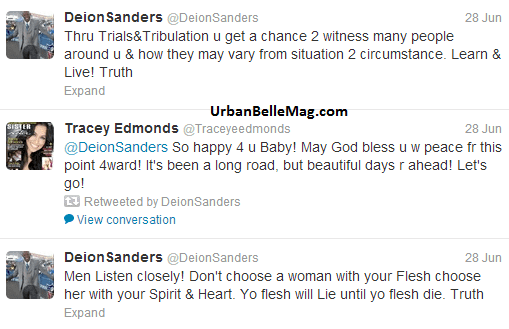 Pilar Sanders is Writing a Tell-All About Deion