There is no Tamera Mowry Rihanna beef brewing according to Tamera. Tamera Mowry-Housley continues to share her thoughts about relationships and offer good advice to all the women out there who are still in search of their soul mates. But some comments from a recent interview she did has caused the talk show host a slight bit of drama as she has been accused of firing shots at Rihanna. During her interview with CocoaFab, Tamera gave advice to the single women out there who are looking to get married and start a family one day. And the advice she gave consisted of a list of the top six ways to be a good girl in marriage and motherhood. The first item on Tamera’s list is what led to the Rihanna shade accusations.

“Like my grandmother always said, ‘dare to be different’,” says Tamera. While it’s popular these days to be the Rihanna to his Chris (okay, sans the abuse fiasco), consider being different from all of the overly sexy, turnt up girls. Guys want someone who stands out from the crowd. Remember, there’s a HUGE difference between wifey and wife! Don’t get it twisted.

The site’s editors combined their own commentary with Tamera’s quotes, which caused people to think all the comments on the list were all coming from Tamera.

Tamera wasn’t too happy about it and after getting accused of shading Rihanna, Tamera took to her Twitter account to clear things up. Tamera also says she never mentioned Rihanna or Chris Brown in the interview and she loves Rihanna (Read from bottom to top): 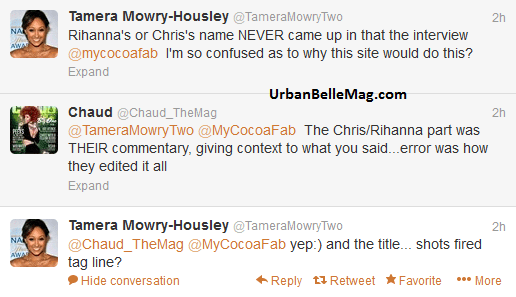 Tamera Mowry Catches an Attitude with Jeannie Mai on ‘The Real,’ Then Apologizes