Is there a Wale and Tiara Thomas beef brewing? Wale might have gotten a hit out of his single “Bad” which featured up and coming R&B singer Tiara Thomas, but it also appears it’s caused some drama for him too. Although Tiara actually helped co-write the song, apparently the friction between the two artists came from some contract issues. After the song became a smash hit for Wale and both established a friendship prior to recording the hit, Wale expect Tiara to sign with him. However, Tiara decided to go in a different direction and instead she inked a record deal with Division 1/Interscope. Although Wale claims he doesn’t want to cause any beef by saying anything about the situation, those close to the rapper claim he’s furious about the situation and he feels betrayed.

Critics however feel Wale should take most of the blame regarding the situation because he should have had the proper paperwork in place when it came to working with Tiara. Wale agrees with the critics, and claims the whole thing is just a lesson learned.

The other night a woman most claim is the assistant to Wale had some not so friendly words for Tiara. She popped off not too long after Wale simply tweeted “Loyalty.” Read the tweets from the bottom to the top: 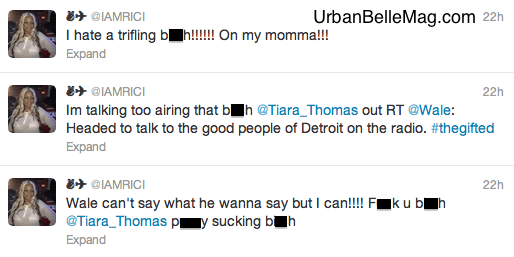 While Tiara didn’t tweet back the rapper’s assistant, she did throw some shade to Wale (read from the bottom to the top):