The-Dream Claps Back At His Low Album Sales

Another The-Dream Twitter rant? The-Dream is without a doubt one of the biggest behind the scenes influencers of music. Not only does the producer work with some of today’s biggest artists in the business, but he also writes hits for them. Interestingly enough, The-Dream hasn’t quite been able to do the same thing for himself, and his recent album “IV Play” flopped and only sold 23,000 copies in its first week. While some seem to think the album didn’t perform well because there wasn’t a hit single to give it any buzz, unlike most artists, The-Dream still remains a popular figure in music because of all of the work he does for other artists. But that doesn’t mean people still don’t try to come for the producer, singer, and songwriter on Twitter about his “flop” albums.

Recently, one of The-Dream’s critics took to Twitter and attempted to make fun of him for his recent flop. However, The-Dream quickly let his critic know that he doesn’t have to depend on album sales because he’s wealthy from producing and song writing for some of today’s biggest artists. Check out the tweets (read from top to bottom): 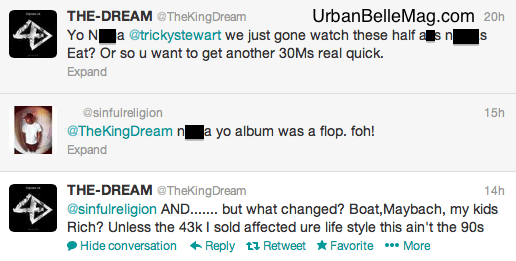 The-Dream also appeared to have taken some shots at artists who are pushing units in excessive of 300,000 in first week sales. While that’s considered a huge achievement in today’s music industry, The-Dream says he’s not impressed by it. Some people seem to think he was shading J. Cole in some of these tweets, but we’re thinking he’s just shading the nature of the music business for artists in general. He tweets (read from the bottom up): 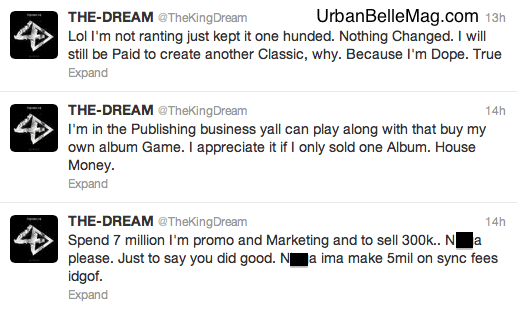 The-Dream Gets Married for the Third Time