The Jay-Z and Lil Wayne beef continues. Jay-Z and Lil Wayne are two rappers many would suggest are on top of the rap game, however, they aren’t too fond of each other and they have made that clear in their most recent lyrics. Instead of letting things escalate into violence, both rappers seem to prefer to take subliminal digs at one another and it appears there’s no limits to what they will say to make the message clear. Considering Lil Wayne recently dissed Beyonce on wax, it’s no shocker Jay-Z clapped back in one of his new songs for his upcoming album Magna Carter Holy Grail. Vibe reports:

Jay-Z is out for blood on “La Familia,” the latest lyrics to be released via the rapper’s Samsung app. On the short, two-verse track, Hov addresses Roc Nation Sports being probed by the NFL, as well as an investigation by the FBI. His most controversial bars on the new song however, are seemingly aimed at Lil’ Wayne.

Back in 2011, Weezy spat a threat to kidnap Beyoncé on the track “It’s Good” on his Tha Carter IV album. Defending Birdman against Jay-Z’s “Baby money” line on Watch The Throne’s “H.A.M.,” Wayne fired back with: “Talkin’ ’bout baby money, I got your baby money/Kidnap your b*tch, Get that ‘how much you love your lady?’ money.”

Now, on “La Familia,” Jay-Z reveals that Lil Wayne’s threat did not go unnoticed. He jabs back with the lyrics “Wanna kidnap wifey/ Good luck with that bruh/ You must gonna hide your whole family/ What you think we wearing black for.”

Check out the full lyrics below: 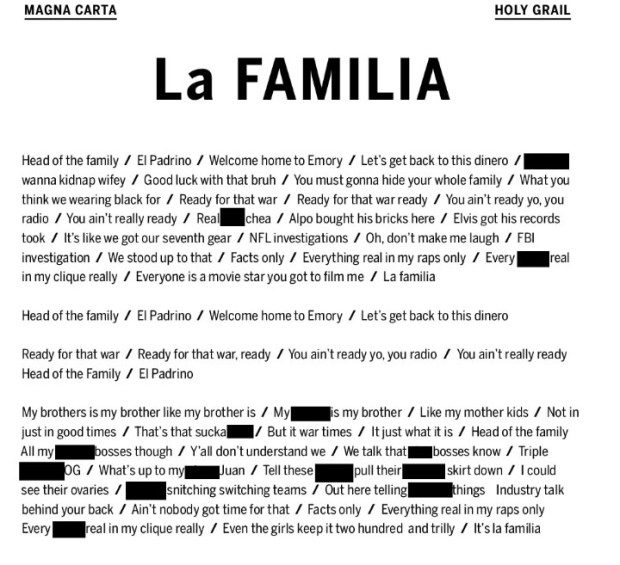 Jay-Z Gives An Update on His Relationship with Kanye West