The Meagan Good BET Awards 2013 controversy has caused plenty of debates in the black community. Meagan Good should be used to being the target of criticism by now, especially since the criticism only intensified after she married young pastor DeVon Franklin. Now that the actress has also added “First Lady” to her resume, everything she does gets scrutinized. Meagan has already tried to explain she’s still human and tries very hard to be a great woman and wife to her husband, but even DeVon’s recent defending of her hasn’t been enough to silence the critics. So it’s probably not a shocker the dress she wore to the 2013 BET Awards caused a lot of backlash and the actress and her husband were slammed on social media for her wardrobe choices. Meagan clapped back by posting a positive comment sent to her that pretty much summed up her feelings on the controversy: 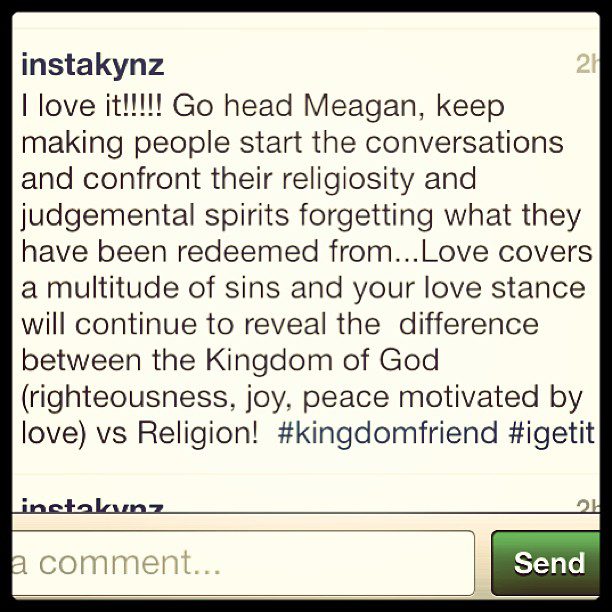 Meagan’s “clap back” only led to more criticism. Here are some of the angry responses written on her account:

When you are a LEADER of a church you are appointed by God. LEADERS have a different standard than the rest of the congregation

I am a huge fan and think you are one if the most beautiful actresses I’ve seen. I am also a believer and its not that you didn’t look stunning at the award show because you did but there is a modesty that we as women of God should have not for man but because it pleases God. And that’s not religious. You def set an example for women and I think you should be mindful of that when making decisions about anything not just clothes. Still love and respect you! But set a #standard

1 Thessalonians 4:3-7. Outfits like thst causes others to LUST and accprding (sic) to verse 6, one who clsims (sic) to be in Christ shouldn’t do that to their brother or sister. Period. Why would God tell you to expose your body to others being that you’re a married woman. He uses an analogy in Ezekiel 16 of such women to describe the Israelites… WHY woul (sic) you do that? There is a way to be “sexy” without having your breasts and nipples exposed. You are too beautiful to do that and quite frankly you hsve (sic) a husband, so its not like you’re doing it to get a man. God didn’t tell you to wear that, that was your own flesh.

I don’t even go in on celebs like that cause I can’t even imagine the pressure but forreal (sic), you should not have worn that and even more so presenting a gospel award. Come on, this is why people take black folk for a joke. We can put the religion to the side and deal with our self-respect right now. I swear I’m only saying this cause I want you and all of us to do better because I know we can. These flashing lights and glam crap has gotten us confused. It was inappropriate and you gotta own up to that. Forget the “do you” and whatever other phrase we want to coin for us not wanting to be held accountable for our stuff. This is all out of love. We can be better!

Meagan also joined in on the conversation and responded to her followers by telling them exactly how she feels about the controversy:

@adriannacolbert That’s the thing Girl- is that I don’t feel convicted about this at all .,my spirit is saddened that our people only know one way to think and process things.. I’m not any less holy because the dress I wore -I may not be who people think I should be -but I’m morphing into exactly who God wants me to be.. My excuse is never “I’m going to do me” and I don’t feel that I need to make an excuse or defend or what I wore .. I know I have a responsibility -and I’m working daily to fulfill the full potential of all God has created me to be.. A dialogue was started about my character, integrity, my walk with God and my Husband -simply based on a dress that I wore.., Of course I’m going to have a reaction to people saying negative things… It’s just sad.. Makes me sad not regretful.. My heart and spirit is always open to whatever my Father would want to share with me… And my spirit tells me to be exactly who I authentically am -because that’s what’s going to reach who I was authentically designed to touch.. people like me who are often misunderstood and told their cut of God’s promise -because they don’t look the role …when God doesn’t care about us “looking the role”..he is always cared about bringing us in -and us being whatever we need to be to bring Those left out in .. And it just makes me sad that us as Christians can’t see beyond our initial reaction and don’t seek God before the attack other brothers and sisters …and never think for one moment that: God knows what he’s doing and he uses everything for his glory .. and he has a plan for every specific situation.. I had intentions on anything .. Merely picked a dress I saw and loved … God knows my heart and that I didn’t do anything wrong .. And he will use even people’s thoughts to bring him glory

Here’s the dress that caused the backlash:

Meagan Good is Over the Bad B*tches Movement

Meagan Good is Still Feeling Some Kind of Way