Jay-Z’s “Magna Carta Holy Grail” album caused the Internet to crash late last night with all the streaming and downloading that went on as people were more than ready to take a listen to Mr. Carter’s 12th studio album. And judging by many people’s first impressions of the album, it already looks like Jay struck gold with this one as “Magna Carta Holy Grail” became a trending topic on Twitter in no time. Before it made its way to the web, Jay-Z gave folks a dose of what to expect from the album with songs like “Jay-Z Blue,” where the rapper opens up about his fear of not being a good father and he even addressed the long-standing Illuminati accusations on track “Heaven.” After coming together for Justin Timberlake’s hit song “Suit and Tie,” Jay-Z and Justin Timberlake linked up for a second time for the song “Holy Grail.”

Another track from Jay’s new album that his fans are really feeling is “Part II (On the Run) ft. Beyonce. Jay-Z and Beyonce’s MCHG duet is reminiscent of the couple’s 2003 smash hit “o3 Bonnie and Clyde” as the song reflects the love shared between a rebellious couple on the run. It wouldn’t be an album without a Jay and Bey collaboration right?

Here are the lyrics for “Holy Grail” ft. Justin Timberlake: 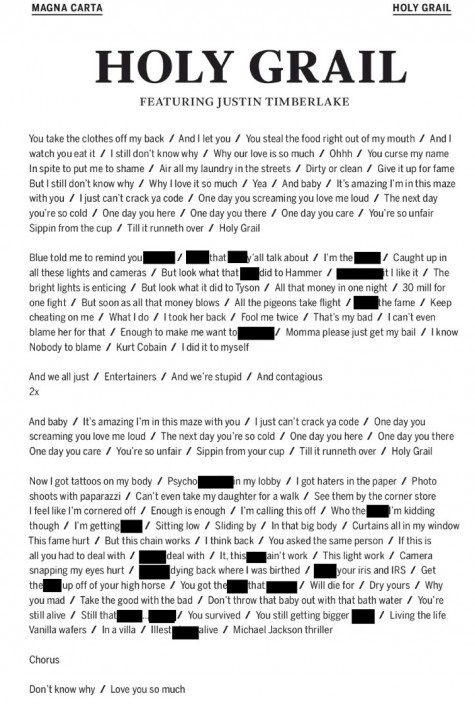 And the lyrics for “Part II (On the Run) ft. Beyonce: