Tameka Raymond talks about Usher hug after custody hearing and calls it a media ploy? Tameka and Usher Raymond squared off in the court yesterday as the ex-wife of the singer was granted an emergency custody hearing over the recent pool accident involving their son Usher V. Shortly after the accident happened, Tameka sought primary custody and claimed Usher tends to leave the kids with people who don’t know how to properly supervise them. After hearing testimonies from Tameka, Usher and Usher’s aunt, who was watching the children when the accident took place, the judge ruled in favor of Usher as the kids will remain with him.

Before they left the courtroom, something very unexpected happened between Tameka and Usher. The singer walked up to his ex-wife, embraced her and had a few words with her. Seeing as though Tameka and Usher’s ongoing custody battle hasn’t been a very pleasant one, those who saw the hug take place weren’t sure how genuine it really was. According to Tameka, the hug was simply a stunt for the media. Tameka Raymond was questioned by the press outside of the courtroom on her feelings about the result of the hearing and Little Usher’s current condition.

When asked how she felt about the outcome of the hearing, Tameka says she plans to keep fighting for custody:

“I just want to get back to where my son is. I’ll be back in court on the 27th. We will revisit all of this. It was only a very small amount of evidence that was allowed in because this was an emergency, trying to get something changed immediately. But for a long term, I’ll see on 27th…I’ll be back.”

Tameka continues by telling the reporters Usher V is doing okay and that she is ready to see him.

Just before the questioning session wrapped up, a reporter asked Tameka about the hug she shared with Usher in the courtroom. And although she refused to tell the media what was said during her brief conversation with Usher, Tameka did say Usher’s hug was nothing but a stunt for the media before her lawyer stepped in to cut the interview short:

“That was a media ploy. It’s whatever.”

Tameka even let one of her followers know not to read too much into the hug (Read from top to bottom): 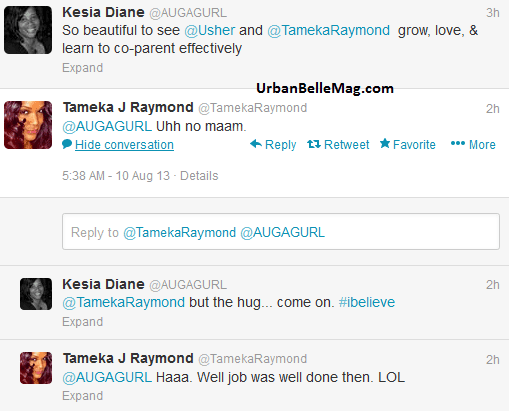 One of Usher’s Accusers Allegedly Fires Attorney + May End Lawsuit