K. Michelle album sales news won’t be final until her album drops next week, but it’s clear the singer’s main focus right now is promoting her new music. K. Michelle is probably one of the only stars of “Love and Hip Hop Atlanta” who can actually have success outside of reality television. The R&B singer inked a record deal with Warner Bros. just months after the first season debut of the hit VH1 reality show, and since then her rapid building of a fan base has led to sold out shows all over the country in multiple venues. With her fan base only increasing by the day, it makes sense the singer plans to release her first studio album on August 13, and her first single “V.S.O.P.” is getting many spins on numerous radio stations. Now that she’s confirmed she will be completely walking away from the “Love and Hip Hop” franchise after she wraps up her first and only season with the New York cast, it’s clear she really just wants to put her focus into her music, even if she does have her own reality show on the way.

While discussing her upcoming studio album “Rebellious Soul,” K. Michelle claims she really wanted to record an album that didn’t require skipping through songs. She of course feels one way to achieve this is to sing about what she labels is real life situations, and not to be afraid to be raw in the lyrics. She tells VH1:

“You can’t have this ratchet song here and then go to ‘I Don’t Like Me.’ It just doesn’t work. It has to flow. Even though I wanted to tell a story, I wanted it to be where you can hit play and not skip. That was very important on this album.”

And these days, most artists are measured by their first week sales when a label decides whether or not to push forward. But K. Michelle says she doesn’t care about album sales, she’s just thankful she had a chance to make a studio album. She tweets (read from top to bottom): 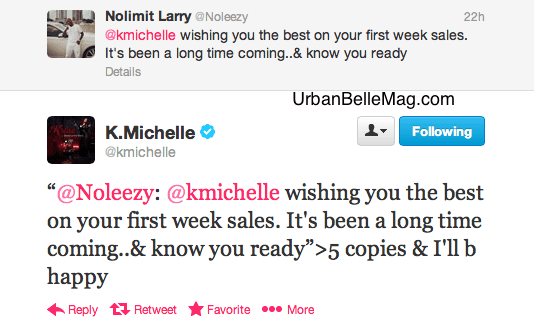