Candiace Dillard is done with Ashley Darby and Gizelle Bryant.

“Real Housewives of Potomac” star Candiace Dillard Bassett was a hot topic on social media due to the recent episode. As we reported, Ashley Darby’s friend accused Chris Bassett of trying to flirt with her at Karen Huger’s spring bling event. Although Gizelle Bryant gave the woman an opportunity to tell her side of what allegedly went down that day, Candiace doesn’t believe any of the accusations made about her husband. In fact, she thinks that Ashley and Gizelle are just thirsty for a juicy storyline. And in Candiace’s opinion, multiple people are lying. This comes after Gizelle accused Chris of making her feel uncomfortable at the reunion.

Candiace said that Gizelle and Ashley’s actions are deal breakers. So she won’t be attempting to hash things out with them in the near future. Interestingly enough, this isn’t the first time that Candiace has had a friendship crash and burn on RHOP.

Some may have instigated the fallout.

Most fans will probably never forget her controversial fallout with Monique Samuels. Their friendship fell apart after Monique was accused of having an affair with her trainer. She denied that she had stepped out on Chris Samuels. And she said it was disgusting that a former friend alleged that she not only cheated but it was also alleged that the trainer fathered Monique and Chris’ youngest child.

Monique said the former friend repeated these claims to Charrisse Jackson-Jordan. And Charrisse allegedly brought the accusations back to the rest of the “Real Housewives of Potomac” cast.

Interestingly enough, this was all brought up at a dinner some of the ladies attended after Andy Cohen’s baby shower. Candiace witnessed the conversation and went back to inform Karen Huger of what was alleged. And Karen proceeded to take this right back to Monique.

This resulted in Monique feeling some type of way about Candiace. Ashley Darby certainly made things worse after she told Gizelle she heard Candiace befriended Charrise to get under Monique’s skin. It was originally suspected that Candiace took issue with Monique making peace with Ashley after she accused Monique of drinking and driving.

Chris Bassett made time to defend his wife on Twitter.

Regardless, Gizelle told Monique that people suspected Candiace befriended Charrise to hurt Monique. And not too long after, the women had an altercation at a winery. Nothing was resolved between Candiace and Monique. Monique then departed the show.

Well, Monique has been on the minds of some RHOP fans after Mia Thornton assaulted Wendy Osefo. Of course, Candiace is Team Wendy. And she said that it was wrong for Mia to assault Wendy with her drink and purse over words. So the situation gave Candiace flashbacks.

Interestingly enough, some fans think Candiace is being hypocritical during the current season.

A Twitter user didn’t hold back after someone else expressed that they aren’t feeling the accusations being made about Chris. And it’s manufactured drama that could hurt a marriage.

In response, the person tweeted, “But it was ok when Candiace brought a woman on the show who was spreading lies saying Monique was sleeping with her trainer & her baby wasn’t biologically her husband’s?”

He tweeted, “It’s ALL THE LIES in this tweet….I swear y’all just make up **** so happy you can sleep better at night…PLEASE tell me who @TherealCANDIACE brought on this show to ‘spread lies’ about her?!? 🤦 🤦 🤦 🤦” 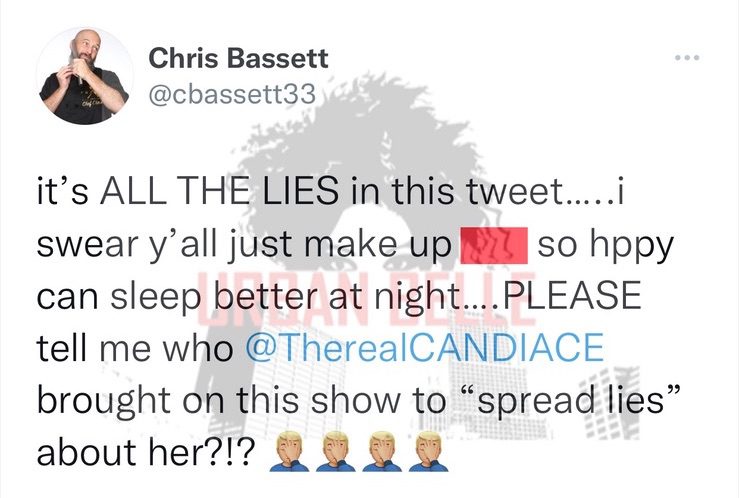