Phaedra Parks Thinks She Did Nothing Wrong & Should Not Have Been Fired?

Phaedra Parks will not be in season ten of “Real Housewives of Atlanta.”

While it was rumored that she could end up filming a final scene with Porsha Williams, it was later revealed that the former housewife has definitely lost her peach.

Andy Cohen says none of the ladies wanted to film with Phaedra.

And Phaedra was iced out of the show due to the fact that it was revealed that she was the one who told Porsha that Kandi Burruss and Todd Tucker wanted to drug her and have their way with her in their nonexistent s*x dungeon.

The claims turned out to be false, and Kandi wants nothing to do with Phaedra, and neither does Porsha.

However, some of Phaedra’s supporters feel like she did nothing wrong and she shouldn’t have been kicked off the show. 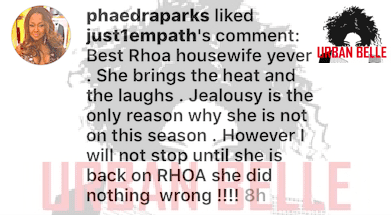 Is Phaedra Parks Joining the ‘Married to Medicine’ Cast?